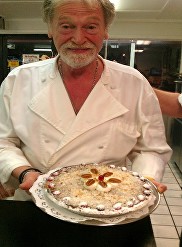 Murrells Inlet Seafood is proud to announce that Austrian Master Chef Detlev (Ted) Martitsch Kreiner is becoming more seriously involved in the creation of homemade delicacies at our gourmet seafood market. Chef Ted is already a legend for his soups, chowders and gumbos at the store – but he is branching out into new territory.

“Chef Ted is the consummate researcher” says owner Rick Baumann. “He is 67 years old – but he has the enthusiasm and energy of someone right out of culinary school.”  In fact, Chef Ted has been a cutting edge participant in the culinary arts for several decades. He came to America in 1972 and was Executive Chef at many of the very best restaurants in New York – “21” Club, Fraunces Tavern, The Sign of the Dove, and Tavern On The Green.

In 1982, Chef Kreiner went back to Austria and earned his European Master Chef certification in a grueling ten day competition. This occurred during his eight year tenure as Executive Chef at Resorts International in Atlantic City where he supervised 250 employees at a property that grossed 42 million dollars a year.

According to George McNeill, Director of Culinary Operations for Resorts International “Chef Ted was the driving force behind our classical French gourmet room (Le Palais) getting a four star rating.”

According to Baumann – “Most classically trained Chefs perform within the parameters of that training. Not so with Chef Ted. He is as comfortable and creative with Creole, Thai or Asian Fusion as he is with French or Italian.”

“Ted spends more at the book store researching new culinary thinking than anyone I know. My store is now full of the cookbooks which he has committed to memory and passed on to me.”

“Most of the young Chefs in the area that Ted has worked with let their egos get in the way of the learning experience they could be having with him. Not me. He affectionately refers to me as his “Certified Executive Redneck Chef” – and I am honored with that title. He is a freaking genius” says Baumann.

Chefs Kreiner and Baumann have embarked on a new “Power Food” line to accompany the fresh seafood offered for sale daily at the market. The emphasis is on fresh seasonal fruits and vegetables which are as healthy as they are tasty. This week’s features are:

“I do have one big problem working with Chef Ted” says Baumann. “I tend to eat even more than I learn.”

We are the Oldest Seafood Company in Murrells Inlet !